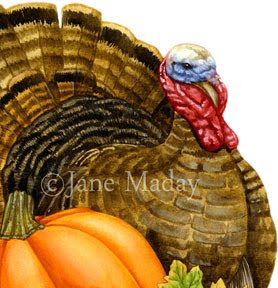 This is just a short blog post to wish everyone a very happy Thanksgiving. I hope today is filled with the people you love and lots of pumpkin pie! I'll be making my mother's special pumpkin chiffon pie recipe. I have modified it a bit, so it doesn't use raw eggs.

In a double boiler, stir in cream and pumpkin. Add gelatin, mixed with 1/2 cup sugar, salt, and pumpkin pie spice. Cook over boiling water, stirring constantly, until gelatin has dissolved and mixture is starting to thicken (about 8 min). Remove from heat and chill until cool, but not set. Mix up the egg white powder with water (as directed on package, to equal two egg whites) and beat until it holds soft peaks. Gradually add 1/4 cup sugar, beating until peaks are firm. Fold into pumpkin mixture, blending well. Pour into graham cracker crust and refrigerate until set. 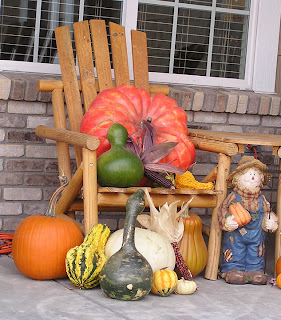 Harvest time is wonderful, isn't it? We are finished bringing in everything from our garden. The tomatoes have all been made into sauce, the spinach is in the freezer, the squashes are lined up in a row in the garage, the honey has been extracted from the hives, and Mr Right has lots of hot peppers!
Today it got windy and stormy, so it was time for the March of the Tumbleweeds to begin in the fields behind our house. They wait until they are all dry and ready to snap off their bases, and then when the winds blow, they roll in a parade across the field! However, it did mean that I had to drive a bit of a slalom course down the road when I went to do the school run! 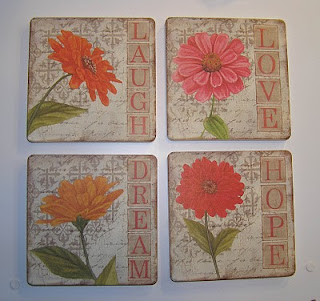 Soon it will be time for lots of visiting family and friends, so here are some samples of coasters that just arrived from Coasterstone! We want there to be lots of places for people to set down their drinks, don't we. This weekend we are hosting the annual Mead-making class, so I expect about 25 people to show up. Fortunately I have done lots of other coasters too!

Posted by jane maday at 2:40 PM No comments:

Things are Golden in Golden 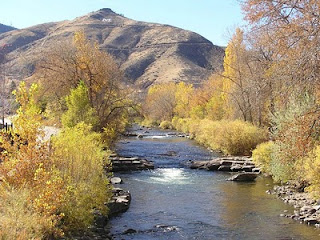 On Saturday, Ian and I decided to drive up to Golden, CO to take an art workshop at the Foothills Art Center. Golden is a very picturesque town and we did a lot of walking up and down hilly streets. The leaves are almost past their peak, as you can see in the photo, and I think our unseasonably warm weather might be over, so I'm glad we had one last warm sunny day to explore! After growing up in Florida, where the changing seasons don't really manifest themselves, I love watching the colors in the Fall. Do you have a favorite season?
Posted by jane maday at 9:33 AM 2 comments: 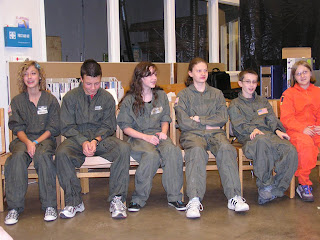 Today is an exciting day for Margaret (she is the third from the left). Her school has a wonderful program called WAVE (Webber Aeronautical Ventures in Education). This is an astronaut and space science training program, and Margaret is heavily involved. There are only seven schools in the country that have this program, and it was set up by NASA. They have an actual space shuttle simulator. This year, Margaret was chosen as one of six astronauts. They do a lot of the same types of physical and simulator training that real astronauts do, and then they "fly" a mock mission. The launch was this morning, and they sleep in the shuttle tonight, so I won't see her again until tomorrow night. 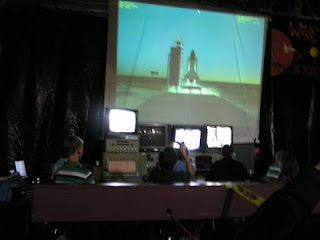 Here is a picture of mission control, showing the launch. The pilot flew by hand, rather than autopilot, which is very hard to achieve, but he did it beautifully. Margaret is payload astronaut, so her job is to take care of the satellite that they will be retrieving. The teacher astronaut for this mission is Margaret's science teacher, who also happens to be the national liaison for teachers with NASA, so she is very knowledgeable and experienced. They are lucky to have her, and Margaret adores her. The launch was very well done, they all handled it very professionally. I might pop over again later-they have a camera feed to the inside of the shuttle, so we can see what the astronauts are doing. Ian says, "Mom, you know she's not a real astronaut, don't you?" but I can't help being excited!

jane maday
This is my new blog all about my adventures and pitfalls in the world of art licensing, and also painting, kids, and life in general! I love painting, birdwatching, and being a mom to my wonderful kids and a wife to my wonderful hubby (AKA Mr Right). Just a reminder, all the art I publish on this site is under copyright, so please do not copy it without permission. Thanks!

I have been licensing my art onto products for about 10 years now. I have a great group of about 50 clients that I work with, and I appreciate each and every one!